Fresh, crispy, and packed with incredible flavor. If you’re looking for a delicious seafood dish in the New Bedford area, look no further than our Fish and Chips. Made with fresh local haddock coated in a homemade beer batter, this dish is easily our best seller. Our Fish and Chips also features sides of homemade coleslaw, creamy tartar sauce, and crispy premium-cut fries that complement the mouth-watering fried haddock.

Fresh, crispy, and packed with incredible flavor. Looking for a delicious seafood dish in the New Bedford area? Look no further than our Fish and Chips. This dish is easily our best seller . We make it with fresh local haddock coated in a homemade beer batter. Our Fish and Chips also features sides of homemade coleslaw, creamy tartar sauce, and crispy premium-cut fries that complement the mouth-watering fried haddock.

Our Fish and Chips recipe is entirely our own and made with love. It doesn’t get any better than Cove Surf and Turf’s mind-blowing #1 best seller. So, do yourself a favor and try it out next time you’re in the New Bedford area. Even if you aren’t in the area, take a little road trip and come see us at Cove Surf and Turf. We guarantee you won’t regret it.

Cove Surf and Turf is currently open for indoor dining, heated outdoor dining by the water, contact-free curbside pickup, and delivery service. Our curbside pickup and delivery services have been more popular than ever while many people aren’t comfortable going out restaurants to dine. We pack all of our fried seafood in biodegradable and compostable sugarcane containers. These help to release moisture while retaining heat and crispiness. That ensures your food arrives as fresh as possible in top-notch condition. And it creates a minimal impact on our precious environment.

Read More
The type of fish used in fish and chips is entirely dependent on the restaurant. Here at Cove Surf and Turf, we use local haddock that is delivered to us fresh, multiple times a week from the Port of New Bedford, our nation’s number one commercial fishing port. We believe that fish as delicious as our fresh haddock deserves to be made-to-order. So we hand-dip it with a homemade beer batter and never use pre-battered or frozen fish like some other places

For the perfect accompaniments to go with the best fish and chips recipe, we serve homemade coleslaw and creamy tartar sauce. We finish the dish with crispy, skin-on French fries and toss them in our homemade spice blend. Everything about this dish is unique to Cove Surf and Turf, making it a truly special dish for both our guests and our team. For those looking to switch it up with an upgrade, our French fries can be substituted for our beer-battered onion rings or cinnamon & sugar sweet potato fries with sweet dip.

It comes in three different sizes to ensure that you get exactly the right amount of food that you need to satisfy your appetite. Our fillets are a quarter-pound each. You can choose to order a small with one, a large with two, or an extra large with three fillets. Plus, each size has a little more fries than the smaller one. Other variations include our Fried Haddock Sandwich, Spicy Haddock Wrap and even Kid-Sized!

What is Haddock and Why Do We Use It?

Haddock is a North Atlantic white fish and a member of the cod family. It’s often used interchangeably with cod due to their similarities. But it’s known to have a bolder flavor and a more tender texture than cod. Most of the time you order fish and chips, you’re going to get cod, pollock or another lower-priced white fish. We prefer to use haddock because we believe it produces tastier results. This allows our restaurant to shine over other seafood restaurants in the New Bedford area.

People love haddock for its incredible flavor and for being one of the healthiest fish you can eat. Nutritionists and healthy eaters favor this prized fish because it’s low in calories and mercury, but high in protein. Packed with heart healthy Omega-3s, minerals, and B vitamins, haddock is a fish you can feel good about eating—even when it’s fried in our delicious homemade beer batter alongside crispy French fries, homemade coleslaw, and creamy tartar sauce. It’s all about balance, people!

History of Fish and Chips

Fish and chips is arguably the most famous dish in Britain’s history. The dish has over 10,500 shops dedicated to it just in the UK. We’d say it’s hard to get more British than fish and chips. After all, it is the country’s national dish. While there has been some debate on where the first fish and chips shop opened its doors, most historians agree that it was in London.  Credit goes to Joseph Malin for opening London’s first fish and chips shop, or ‘chippie’ as they call it in the UK, in 1860. While the shop eventually closed down in the 1970s, there are chippies in London that have been serving up the iconic dish since the 1870s.

As the Industrial Revolution brought about new inventions that would help ignite the growth of fish and chips across the country, fish and chips shops began popping up all over the place. It was the perfect cheap and satisfying meal to feed to factory workers. At the height of its popularity, there were over 35,000 chippies in the United Kingdom. After a visit to Britain, former U.S. president Thomas Jefferson wrote about enjoying a meal of fish and chips, so it’s no surprise that the famous dish would eventually make its way over to the United States.

Once the dish was brought to New England by immigrants, it blew up in popularity and is now one of the most beloved dishes in the region. With its convenient geographic location on the coast, New England was already well-known around the United States for its seafood cuisine. The introduction of fish and chips was a no-brainer, instantly becoming a staple dish throughout the area.

What people say about our Fish and Chips:

“We had the Fish and Chips they were delicious! Also started with the best onion rings we ever had! We will definitely be back!” —Pete N Sue T., Yelp

Order yours online at:

11 reviews for FISH AND CHIPS 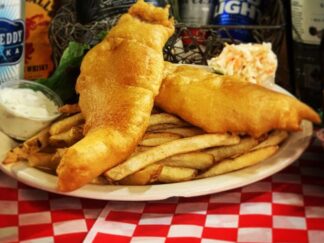